6. The Wabbit and the Great Big Dictator 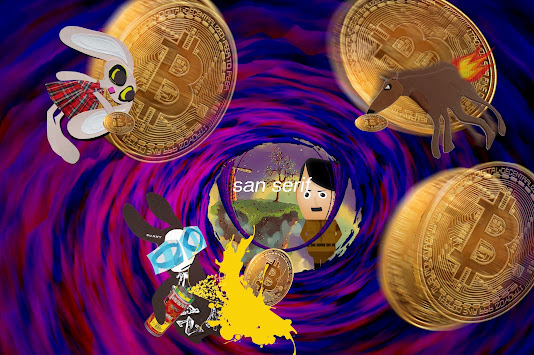 There was no time to lose. A swirling entrance to a black hole appeared then within it an island floating in space. Beside the island stood a figure. The image was hazy at first but as the team worked it became more distinct. There had been a change of plan. The Wabbit dug in his fur for a gold aerosol he'd bought in a market. Lapinette produced gold jewellery and they started to fashion Bit Coins. Arson Fire joined in. These weren't strictly non fungible tokens but the Wabbit had the advantage of years of knowledge. The figure was now totally distinct. He spoke, "I am the Great Big Dictator of the Republic of San Serif." The Wabbit glanced at him but didn't stop working. "I'm sure I've seen you before." The Great Big Dictator chose to ignore this. "He who has the gold owns the future." He clicked his heels. The Wabbit had seen the Dictator's future and he smirked. "You're welcome to it." He waved at the Bit Coins and sent them spinning into the black hole. "This is future gold. I changed your old-fashioned bullion for them." A spark of interest showed in the Dictator's eyes. "How much are they worth?" "Much more than you think," said the Wabbit. "They're much more valuable than cash or gold. And investors mine their own business!" The Great Big Dictator clicked his heels again and shouted. "I asked how much are they worth?" The Wabbit shrugged. "Whatever you say they're worth." The Great Big Dictator began to pick up the coins. "Then Ja! I say they're worth a lot." Lapinette and Arson Fire yelled. "More than that!" The Dictator's image began to fade and so did the islands. His voice was faint. "I'm the Great Bit Dictator." The Wabbit smirked once more. "He got Bit Coin in 1977." Arson Fire nearly had a fit of hysterics. "He'll need a lot of energy."

[Thanks to NASA and Pixabay]