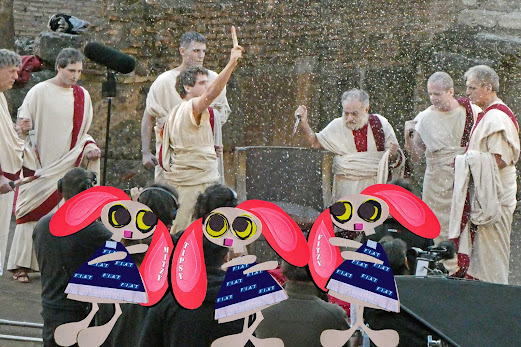 The Three Fates swept onto the stage and swayed like the Ronettes, "You blocks, you stones, you worse than senseless things," chanted Tipsy. "You cruel men of Rome, know ye not the Wabbit?" sang Fitzy. "Do you now put on your best attire, and do you now cull out a holiday?" sang Mitzy. "And do you now strew flowers in his way?" Tipsy's sarcasm completed the picture. They paused. "And where is the Wabbit now?" asked Fitzy. "Suffering the slings and arrows of the Ice Mice," said Mitzy. "Which is no more than his way," added Fitzy. They looked around from right to left. "What is this place? asked Mitzy, "Its look is most familiar?" They walked from one side to another and looked everyone up and down. "Interlopers!" said Tipsy. "Vagabonds," said Fitzy. "Mountebanks," said Mitzy, Tipsy pirouetted. Where was Julius Caesar they wondered? He lay prone on the ground. "They claim to make a television miniseries." Fitzy laughed. "Not about the Wabbit." Mitzy scowled. "He hates that sort of thing." "For good reason," added Tipsy, "With daggers drawn, they fill their coffers with the blood of the poor." Mitzy jumped in the air. "The Wabbit says that men are nearly always willing to believe what they wish." They swayed. "And they always will," said a mournful Tipsy. Together they danced across the stage. "The greatest enemy will hide in the last place you would never look," chanted Fitzy. "Then we must tell the Wabbit," replied Tipsy. "And bid him a happy New Year," said Mitzy. Tipsy looked grave. "Not before it's here." They all nodded - and one by one they vanished, leaving only a TV crew and fake snow.
at December 31, 2021