5. Lapinette and the Big Squeeze 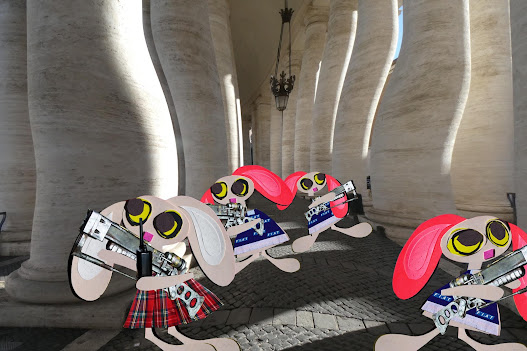 Lapinette and her personal guard hurried to Rome as fast as they could - and for a while everything seemed normal. But when they scouted out the Vatican, things went pear shaped. Literally. The pillars bent outwards behind them. They moved with care and looked round every corner, but the strange phenomenon was everywhere. And it was all too quiet. During Christmas the Vatican swarmed with worshippers but there was not a soul. Tipsy led the way. "I smell something." Fitzy sniffed the air. "I can smell it too." Mitzy brought up the rear. "Smells like a fertiliser factory." It was an earthy smell that Lapinette was familiar with. It smelled like bacteria gone bad. "Poo bum smell," said Tipsy. "Dagnabbit dognoobs!" screeched Fitzy. "Now I know who they are," said Lapinette. "Point them out!" shrieked Tipsy. "It's the Ice Mice. They're controlling things from a space platform." Lapinette seemed calm - now that she knew who it was. "Dirty, smelly poo platform!" shouted Tipsy. She waved her weapon in a menacing manner. "I'll shoot it down." Lapinette shook her head. "It'll crash on the city." She lifted her walkie talkie. "Come in, Wabbit." The radio crackled. "Wabbito here-io." Lapinette sighed. "Be serious Wabbit. We have a situation," "Tell me about it," said the Wabbit, "I'm still drying out." Lapinette took no notice. "It's the Ice Mice." The radio crackled again. "These frothing fools. They exist to make my life difficult." With a horrific crunching the pillars returned to normal. "Shiblets!" muttered Tipsy. "We're making our way to Testaccio," said Lapinette. "Where are you now?" asked the Wabbit. "The Vatican," replied Lapinette. "The Mice must have come to meet Cheesus," snickered the Wabbit. Lapinette sighed. "You're not funny, Wabbit." The radio crackled and died.
at December 20, 2021