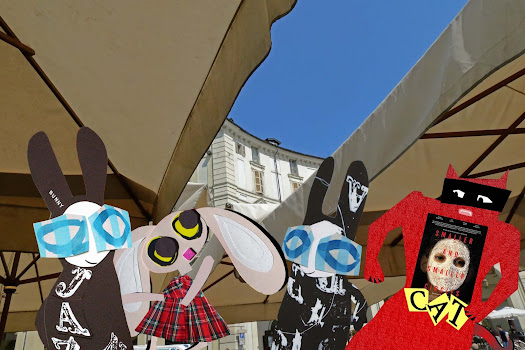 The team were about to take their seats at the chosen Adventure Caffè when Lapinette pointed to the sky and yelled, "It's going to rain." The Wabbit looked up at the unrelenting blue sky and shook his head. Skratch looked perturbed and started to make off. Wabsworth grinned because his barometric subroutines indicated that the weather was about to change. "Definitely rain," said Lapinette. Rain in Turin was a serious business. It poured down suddenly and soaked everyone in its path. "Nonsense," said the Wabbit, "Let's sit down - and if it rains we'll move." Skratch wanted to get down to business. He looked at the sky and made an anxious face. "What was that for a sort of adventure you just had?" Lapinette also squinted at the sky and made a face. "The semiotics of machines is quite different from humans. Spatialising the Euclidean Faction challenges the reader's linear path." Wabsworth smiled. "But it's a matter of coherence and incoherence." Skratch meaowed deeply. "Do you feel we're caught in chaos textuality and the disintegration of action?" The Wabbit chimed in with another question. "Do you then feel there was too much sensory overload?" Lapinette frowned. "No, not at all. There is little wrong with visceral impact." Wabsworth felt the first spit of rain. He laughed. "Is this umbrella tough enough to withstand the visceral impact of Turin rain?" The Wabbit shrugged. "I propose to tough it out." Skratch purred. "Shall we go inside?" The Wabbit scowled. "And get a reputation for being untough?" "That's not even a word," laughed Lapinette.