8. The Lepus and the Alien Crafts 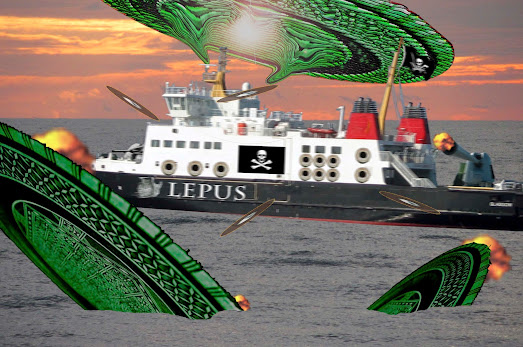 The sound of explosions echoed across the waves as Jenny fired on the Ice Mice. The Lepus had just reached the coast near Fregene when the Ice Mice came out of the sky. They circled around and hurled disc after disk. Most bounced harmlessly from the Lepus but one or two sliced at her masts. "Come about!" said Jenny. "Take aim and fire," The giant 4.5-inch gun on her bow spat flame and an Ice Mouse craft fell from the sky. She lifted her radio and contacted the Wabbit. "I have trouble, Commander."  The radio crackled. "I think my trouble just became your trouble." Enemy fire trebled and multiple discs stung the bows of the Lepus. "They're a devilish nuisance but nothing we can't handle," shrugged Jenny. The Wabbit was stoic. "Probably they'll go away." "They don't give the impression they're going anywhere," said Jenny. All of a sudden disc fire died away. Then the remaining craft wheeled and vanished in the direction of Rome. The crashed vessel creaked like a galleon and sank in a sea of bubbles. "We sent one to Davy Jones', but I don't see any survivors," said Jenny. She cast around with binoculars. "No, nothing." The radio crackled once more. "I think these could be drones," said the Wabbit. "They're probably controlled by a mother craft." Jenny made a comment on mothers that set the Wabbits teeth one edge. "We'll meet you further up the coast," he advised. "But I know the Ice Mice. So I'm advising you to proceed with caution." Jenny laughed. "My caution's all used up. I threw it into the last wind."