2. Terni and the Devilish Phenomenon 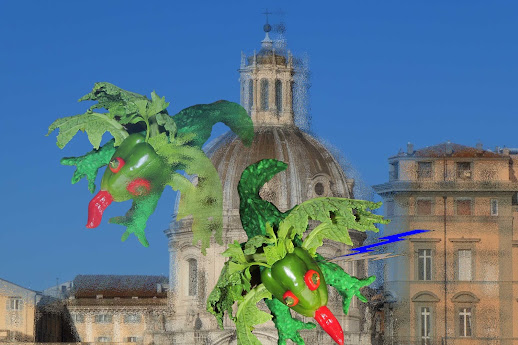 Terni the Food Dragon was patrolling Rome and keeping a watchful eye out. It was close to Christmas and there had been too may occurrences for him to ignore. He swooped round by the Coliseum then wheeled round to the church known as Chiesa del Santissimo Nome di Maria al Foro Traiano. Terni thought the name far too long for such a beautiful church. He always called it Maria. That was when he felt the iciness and saw the flickering light. Although it was a sunny day, a strange shimmering chilled the winter air to freezing and his scales caught the edge of it. "What the very devil is that?" His wings beat faster and he made a ninety-degree turn. "I need to get in touch with the Wabbit." So he sent out an emergency bulletin straight from his brain. It was a while before the Wabbit answered. "I was going to call you, Terni. We have a mission in Rome." Terni swooped higher to pick up fresh currents, but the strange phenomenon affected all the surrounding area. Bricks fell off the church and scattered in the streets below. "Better hurry, Commander, there's something going on here." The Wabbit's radio crackled. "It is unspeakably evil?" Terni made for Testaccio. Fire issued from his pepper mouth as he gained speed. "It's threateningly unpleasant." The radio static increased. He heard the Wabbit say, "Hmm," and felt the need to be terse. "'Hmm', doesn't sound urgent enough, Wabbit!" Terni loved the Wabbit dearly but sometimes he stressed people out. "Get down here now. While there's still something to get down here for!" He listened for what seemed an age. "Keep your scales on Terni. Won't be long. Out." Terni folded his wings as he coasted in to land in Testaccio. "I need a Flaming Dragon."