4. The Wabbit in the Ghostly Rain 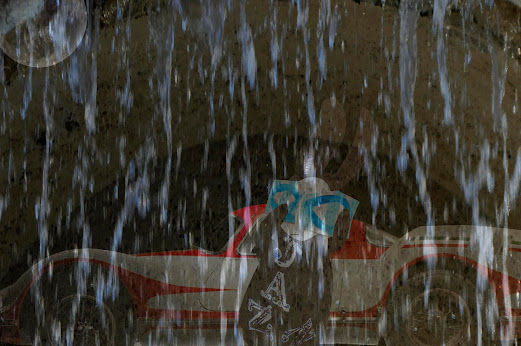 The Wabbit got out of Turbina. The door slammed behind him. Rain lashed down harder than he had ever seen and he wished he hadn't bothered. Turbina had a spartan interior, but the heater was particularly good. A grim moon shone through the rain and he looked up, shook his fist and growled. He turned to Turbina. "This isn't Testaccio!" Turbina's voice was rather strained. "I couldn't see it. I'm not clear where we are Commander." The Wabbit hopped around for a bit and then he got back in the car. "Under the Tiber by the feel of things." He could hear the clicking of Turbina's engine cooling, so he started her up and let her turbine take care of the temperature. "Solution?" he shrugged. "I can try to get above it, Wabbit," said Turbina. The Wabbit didn't have a better idea so he shrugged again and said, "Go for it." The rain produced a mist that shrouded them completely and buffeted them at the same time. Turbina lifted gradually. She had many dials and gauges but all of them were well misted. The Wabbit put his paws behind him and settled back until the air became clearer. With a lurch, Turbina cleared the deluge. The Wabbit looked down at a layer of solid water. "You did say to expect rain." "I didn't expect ghostly daggers from the sky," replied Turbina. The Wabbit jolted upright, "Now that gives me an idea!" Turbina laughed. "Ideas are in short supply." The Wabbit looked down and he could see Rome again. The rain had gone. "Ideas are like fish," he said, "They slip through the paws." "And leave them smelly for three days," said Turbina.