7. The Wabbit and the Ice Mice Attack 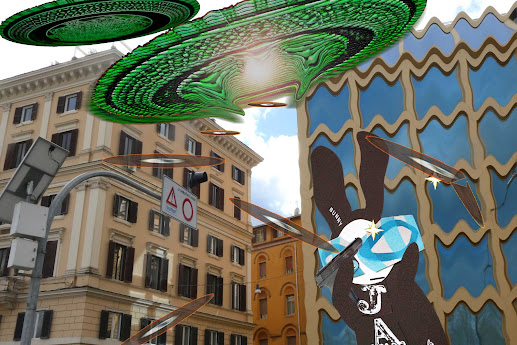 It was all very sudden. The Ice Mice launched an attack on the Wabbit in the midst of the city and he began to run. Worse still, they fired a series of discs that cut through the air and grazed the Wabbit's fur. The Wabbit wasn't having a good Christmas Eve. Not by a long chalk. He should be sitting by a roaring fire, reading that book he'd bought on Satan in the cinema. He jinked right and left but still the discs kept coming. They were razor sharp and lightning quick. There was more than one Ice Mice craft and the Wabbit felt outnumbered. They hovered in the sky close to the Tiber and the Wabbit reckoned there were more. He rummaged in his fur, found his automatic and twisted round. He took brief aim and fired at the closest disc. It shattered. He let off another three shots and all of them found their mark. That'll teach you," mouthed the Wabbit. He heard the diesel throb of an approaching truck and knew it was Lapinette and her personal guard. Could he hold off the Ice Mice until they reached him? The smell of mice was overpowering as if they were using odour as a weapon. It was a rotten fish odour that would anaesthetise a bull. "Yuk, smelly mice," growled the Wabbit. Then he heard the crump of explosions. The craft wheeled and fled. "Reinforcements," thought the Wabbit. He tucked his automatic in his fur, together with some disk shards for analysis. Then he sat on a wall to wait for Lapinette. He thought of a saying. "Don't be a mouse or the cat will eat you." He needn't have wondered where Puma and Skratch were because they too were on their way. "I'll expect them for Christmas," thought the Wabbit.