3. The Wabbit heads for Rome 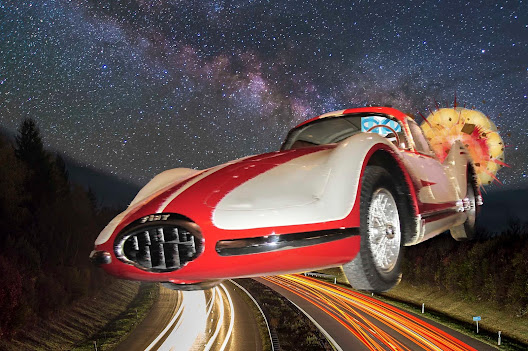 The Wabbit grimaced and clenched his teeth. He'd left instructions with the team and raced for Turbina the Jet Car. He jumped in and off he went. Turbina was a little anxious. "Commander?" she asked. "Emergency!" snapped the Wabbit. Turbina left the ground and circled round. "Rome?" She knew it was Christmas and it was always Rome. The Wabbit felt the throb of Turbina's turbine. "Stay low," he muttered. Turbina blasted down the motorway a few hundred feet above the road. It was always a good bet. The traffic was mostly concerned with itself and unlikely to be any bother. Technically, Turbina outranked the Wabbit by a long way but on occasions she did what was best and went along with him. "Something strange is happening," he stated. "Surely not?" Turbina would have smiled but she was a car. She contented herself by switching the radio on. "Still, still I wonder. Who'll stop the rain?" sang Credence Clearwater Revival. "It's raining in Rome," she added - by way of explanation. The Wabbit shivered and turned on the heating. His paws beat a tattoo on the dashboard. "It's always a crisis. I just can't have a quiet Christmas, sitting by the fire, reading a book." In all the years Turbina had known the Wabbit, she'd never known him sitting reading by any fire. She said so. He looked down at the motorway and saw signs for the Vatican. "Were going to Testaccio," he said. Turbina snorted and made a slight adjustment. "How is my old friend Terni?" The Wabbit shrugged. "Bad tempered as usual." Turbina laughed. "Not like you then?"
[Background motorway. Pixabay Florien Kurz]
at December 13, 2021