1. The Wabbit and the Christmas Prelude 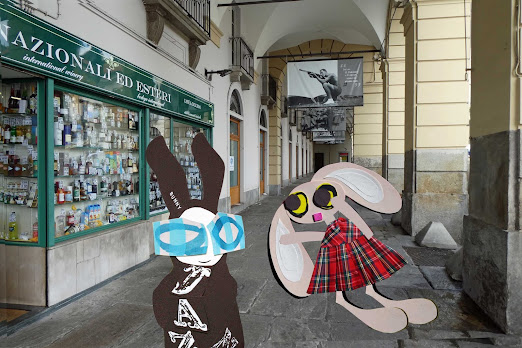 The Wabbit was searching for an early Christmas present for Lapinette. He paused by a wine shop he'd never seen before and mulled over the bottles. Deep in thought he was startled by a cry. "Wabbit, Wabbit, Christmas orders." It was Lapinette. "Oh, just the usual," he said, "A barrel of bonhomie and two packets of crisps." Lapinette laughed. "Not that kind of order," she breathed. "It's Christmas orders from the Department." The Wabbit swung round. "Well, I wasn't expecting anything this late. Rome is it?" Lapinette jumped in the air. "It always is!" The Wabbit's ears curled. "Philosophers' Stones? Christmas pizzas? Time warps? Quantum wells?" Lapinette's ears curled too. "I don't know, Wabbit. The orders are sealed." They both hopped along the porticos holding paws. "Must be importantly important," murmured the Wabbit. He hunched into his fur. "Better assemble the team. and don't tell them anything." Lapinette sighed. "I don't know anything!" "All the better," replied the Wabbit. Lapinette was now completely confused - as was the Wabbit. "Is the truck serviced?" said the Wabbit, for want of anything better to say. "It's at the ready as you well know," responded Lapinette. She knew the Wabbit could be difficult but sometimes he was downright annoying. "Your personal armed guard?" asked the Wabbit. "They're thirsting for blood," retorted Lapinette. "As long as it's not mine." The Wabbit smiled weakly and his blood pressure soared. They hopped a little further. "Sure you have no idea?" said the Wabbit suddenly. Lapinette put her paws at her waist. "I heard a rumour about unspeakable and impossible evil." The Wabbit grinned. "Nothing out of the ordinary then?"