10. The Wabbit and the Craft Shadows 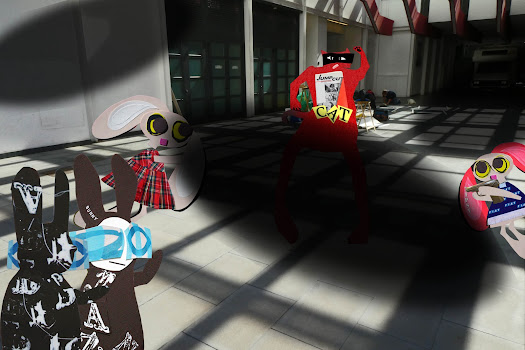 The Wabbit conferred with the team. They were under the Testaccio Market roof and the sun made sharp shadows on the concrete. They'd only been talking a moment when the outlines of three craft blocked out the sun. The Wabbit wrinkled his nose. Skratch looked up and shook his fist but he couldn't see the craft clearly. Tipsy launched forward with an automatic but there was nothing to shoot. Lapinette was puzzled too. "Something fishy about this," murmured the Wabbit, "The Ice Mice are far more formidable" added Wabsworth. "It's not them. Nothing shows it's them" said Lapinette. The Wabbit thought for a moment. "They've run out of hardware. These are projections." Wabsworth gave a considered opinion. "Looks like the Agents of Rabit, Commander." Tipsy waved her automatic. "William Shootpoo Shatner!" she shouted and fired a burst from the gun anyway. The bullets ricocheted and smashed through the glass roof. The shadows vanished. "Aha!" said the Wabbit. "Aha what?" replied Lapinette. "Ahabracadabra, it's a trick," said the Wabbit. "So it is the Agents of Rabit. What do we do about it?" Lapinette was hopping mad and she jumped up and down. So was Tipsy. "Tripsing shifters!" she yelled. Wabsworth's circuits whirred. "Let's go back to where we last had an incursion. They're bound to have left a clue." "Wablock Holmes?" grinned the Wabbit. Wabsworth smiled "Holmesworth if you don't mind." The Wabbit laughed and laughed, "What's my detective name?" "Wabsy Chan" said Lapinette.
at January 03, 2022