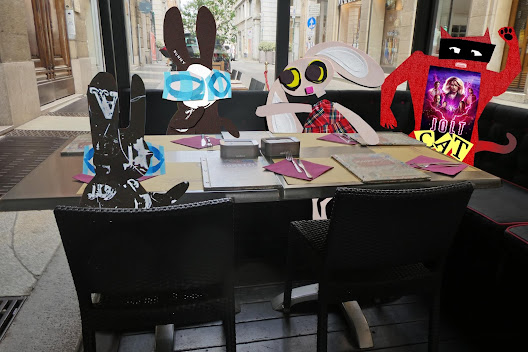 The team assembled as usual, but this time Skratch had got in early - and he was sitting in the corner with his paw up. "I'm first," he said. "I'm going to congratulate you on a splendid adventure. I was in it you know!" Lapinette didn't turn. She was facing the Wabbit and it was to him she directed the question. "You were late Wabbit, and therefore you must tell us what kind of Adventure that was." The Wabbit put a paw to his lips. "It should be Wabsworth, it was all his idea," Wabsworth was more than happy. "It was a tale of the embodied effect." Now Skratch was feeling left out. It was better to arrive late, he thought. "It was good frothy fun," he said, "with an element of female rage." Lapinette turned with a look that would sour milk. Skratch meaowed furiously. "You rewired the shock machine to produce an electrically charged blast that erupted into flames." The Wabbit tried to defuse any argument. "The kinesthetic opposition grounded the semiotic square." Skratch hooted with laughter. "That's a bold hypothesis, Wabbit." Wabsworth was entertained. "Gestalt memories of kinesthesia." He chuckled to himself. Lapinette clapped her paws. "None of you know what you're on about. You're not reading our story intertextually." She flung her arms in the air. The Wabbit was delighted. "I can see we need a new theory of gestures." Lapinette was now on a high horse. "Derrida wrote of genre as a corpus of traces." Her paws went round and round. Skratch nodded. "Your part in the story provided us with enough traces to scorch paintwork." The Wabbit was getting thirsty. "Lapinette, can you gesture for a drink." Lapinette grinned and imperceptibly twitched an eyebrow. "A waiter appeared in an instant.