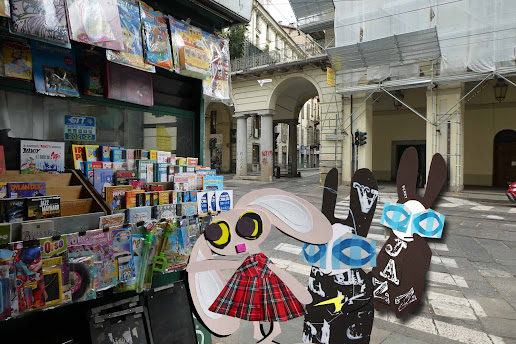 The Wabbit and Wabsworth tracked Lapinette down in the centre of the city. She was choosing a magazine and seemed engrossed. With a silly smirk Wabsworth crept up and tried to give her electric shock, but she moved away. The machine sizzled. The Wabbit gasped. It did nothing but fry thin air. but it made a crackling sound. "Wabsworth, don't you dare!" Without turning round, Lapinette selected her magazine. It was Practical Electronics for The Discerning Amateur. "I didn't think they still published that," said the Wabbit. Lapinette flicked it open. "What on earth are you two up to?" she asked. Wabsworth backed away. "Actually, we wanted to ask you about the ethics of electric shocks." Lapinette whirled round. "By trying it?" She grabbed Wabsworth's machine and tucked it away under her frock. "You're not to be trusted," she said, "You could do someone a mischief." The Wabbit was relieved. "Seriously Lapinette, what about ethics?" Lapinette smiled for the first time. "Practical ethics?"  The Wabbit nodded. They'd reached common ground. "Well, I'd give one to my enemies wired badly. Then if they tried it, they'd be up to their necks in sparks." Wabsworth smiled and held out his paw. Lapinette gave the machine back and he tucked it into his fur. "Let's find an enemy." The Wabbit laughed and laughed. Wabsworth was an android and didn't quite see things in the same way as the Wabbit. "We can't just conjure one up!" Wabsworth smiled a sickly smile. "Yes we can. There's one over there!" Without moving, the Wabbit's eyes flicked up to the top of the buildings. "Oh yes, I can see him. Do you have a plan?"