1. The Wabbit and the Talking Lamp 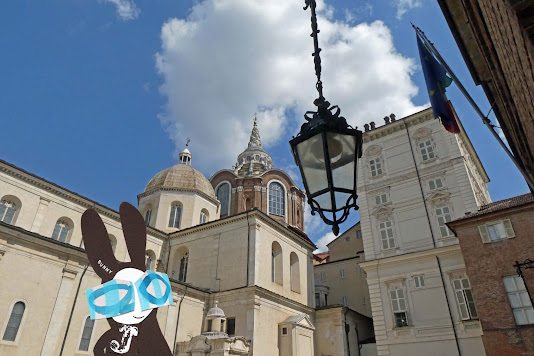 The Wabbit was hovering in the Piazza San Giovanni, where a narrow path linked the Royal Palace with the Cathedral. There was usually a small amount of casual traffic, but on this occasion, the passageway was quiet. He became aware of murmuring and looked up. The murmuring stopped. Then it started again. It appeared to be coming from the lamp and it got louder. "People take no notice of me. I'm just a common old lamp to them." The Wabbit continued to look up and his ears twitched. "You might twitch your ears," said the lamp, "you rabbity creature." The Wabbit smiled but didn't reply. He inclined his head in a therapeutic manner, just like he'd learned in Zurich. The lamp continued. "Switch on, switch off, that's all they care about. But the things I see, they wouldn't care for me to repeat." The Wabbit shrugged slightly, "How does that make you feel?" The lamp flickered even though it was bright day. "Angry, annoyed, frustrated." He paused. "Sometimes they give me an environmental retrofit. Doesn't make a whit of difference, I can tell you. Lumens this and lumens that." The Wabbit grinned and waited. "They change my bulb sometimes, but no one cleans it regularly." The lamp swayed a bit. "I'm a powerful symbol you know. Let there be a light." The Wabbit didn't correct the lamp, it seemed rude. He addressed the lamp directly. "If you could have your way, what would it be? What would you do?" The lamp flickered again. "I wouldn't hang around here for all and sundry. I'd move around guiding the way." The Wabbit thought for a second. "Where would you draw your power?" The lamp laughed a triumphal laugh. "No problem. Power is everywhere." The Wabbit allowed himself a giggle. "OK. I'll see what I can do ..."