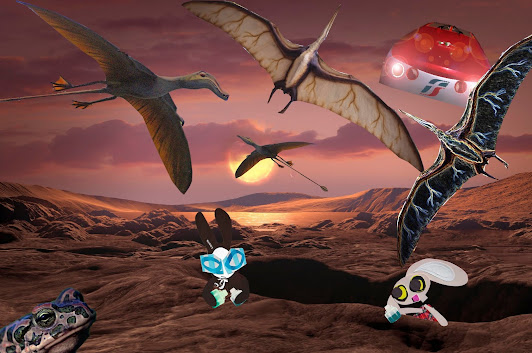 Out on Kepler 1649c, conditions weren't exactly like Earth. "Near as dammit," quipped the Wabbit. Pterosaurs flew around as if they owned the place. "Well done, Commander, you're as good as your word." The Wabbit blushed. "It was a joint effort." He and Lapinette scrambled in a ravine because they hadn't forgotten the main problem. The water on earth was getting hot and the Wabbit had a hunch about a something that might work. "I know there's betaine here, it's a natural coolant." he murmured. He rummaged in his fur and pulled out flasks. He tossed one to Lapinette and she scurried on paws and knees to fill them. "Just a little adjustment should do it, then we'll see." Lapinette helped all she could, but she commented, "This is strictly temporary Wabbit." The Wabbit gave her a wry look. "I'm the Wabbit. I do emergencies, not social policy." He glanced to the side. "Who's that toad?" The response was low and croaky. "I live here." The Wabbit and Lapinette grinned. "That's a very good sign," smiled Lapinette. "Toads are good for ecological balance." The Wabbit was quietly impressed. "You reduce the need for harsh pesticides." He nodded to himself. The toad nodded too. "And these flying things are not my natural competitors. They'll be company for me on this God-forsaken planet." The Wabbit and Lapinette wanted to laugh at his mournful tone, but were interrupted. "I'm such a clever toad," croaked the Toad. So the Wabbit fired off a question. "Do quasiperfect numbers exist?" The Toad nodded. "They do on this planet."