6. The Wabbit's Search for Habitation 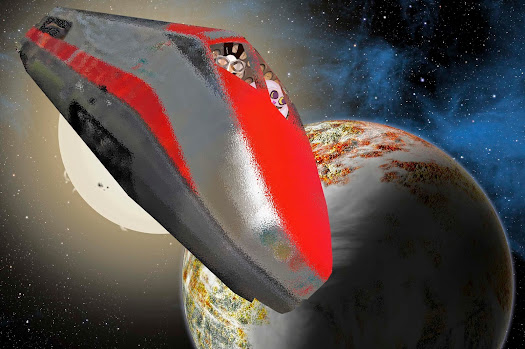 The Wabbit made a series of calls and before long they were zooming into space on Quantum the Time Travelling Train. Lapinette was content to merely watch because the Wabbit was searching for a suitable planet. He's gone further out than he planned because the pterosaurs couldn't agree on a suitable planet to make their home. He thought he'd find something out by Kepler - and Kepler 2c was an object of interest. But he looked and then shook his head. Lapinette articulated his thoughts "It's large but not that large." The Wabbit chortled and asked Quantum. Quantum crackled through the loudspeakers. "A bit rocky with mostly volatiles, Commander. It might not suit our guests." The Wabbit connected to the temporary cargo hold which held the Pterosaurs. "Does it sit well with you?" The intercom crackled with deep prehistoric voices. There was a bit of disagreement so the Wabbit intervened. "Well, we're here, we can go around." A pterosaur spoke up. "What about Kepler 2b?" Lapinette had her handbook of planets with her and this time she shook her head. "It's too close to Kepler. Hot as the Earl of Hell's waistcoat." The pterosaurs thought that very funny and they rolled about the cargo hold in helpless mirth. Lapinette leafed through her book. "The Keplers tend to get hotter and become gaseous." The Wabbit laughed at that. "They do smell like dinosaur fart." The pterosaurs were now hysterical. Quantum chuffed like a steam train. "Kepler 1694c might be the one! It's most like Earth." The Wabbit clicked his tongue. "Why didn't you say that in the first place." Quantum set a new course. He changed tack and everything shuddered as he engaged Lattice Drive. "You didn't ask."