1. The Wabbit and the Alternative Shock 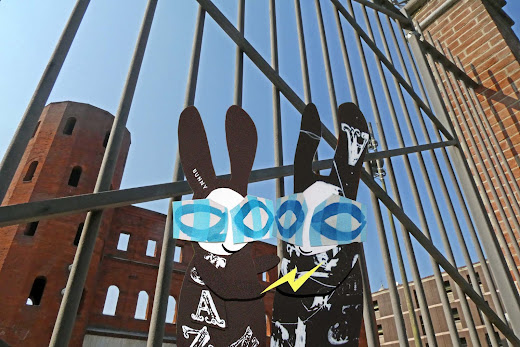 By prior arrangement, the Wabbit met Wabsworth, his android double, at the city gates. Wabsworth was grinning so the Wabbit knew he had something up his sleeve. The Wabsworth proffered his paw for a shake, but it was his left paw. The Wabbit braced himself as an electric shock coursed through his fur. He smiled through it and pretended it never happened. Wabsworth's face fell. "Didn't you feel it?" The Wabbit laughed "Feel what?" he smiled. His teeth were tingling, and his fur was full of static. "I got this electric shock machine at the joke shop," said Wabsworth, "and they assured me it was good." The Wabbit made a mental note to find the shop and give them a telling off. "I'm impervious," he said. Then he had an idea. "Let's find Lapinette and try it on her. I'm sure she'd find it amusing." Wabsworth wasn't certain and he shook his head. "I'm not so sure Wabbit, it might be a bad idea." The Wabbit thought for a second. "How about Tipsy?" Wabsworth pondered. "She's got a sense of humour but I'm not so sure it extends to electricity. She might shoot both of us." They both considered the matter further. "Skratch is a possibility," he murmured. Wabsworth brightened. "I'm sure he'd like it." The Wabbit managed to unstick his other paw from the iron gate. "He certainly loves a good joke." He and Wabsworth smiled to each other. "Let's shake on it," said the Wabbit. He put out his paw, but this time directed a small quantity of his quantum energy towards Wabsworth. Wabsworth blinked once and fell over. The Wabbit looked concerned but Wabsworth picked himself up and dusted off his fur. "Just kidding!"