5. The Wabbit and the Superga Summit 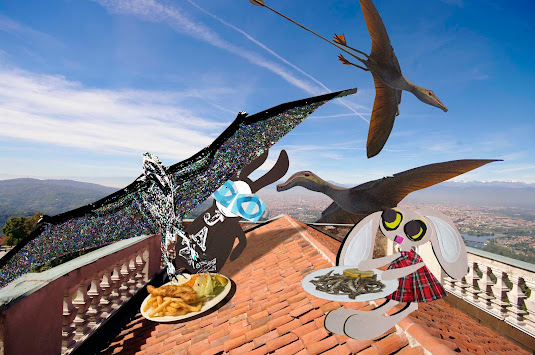 Somehow the Wabbit worked out where they were going and radioed ahead for fish. He just couldn't manage crunchy invertebrates - no one had them. They perched on the roof at Superga while the pterosaurs swooped. Soon they were all too busy munching to tell the Wabbit and Lapinette why they had brought them there. "Fine day," remarked the Wabbit. "Gnam gnam gnam gnam," slurped the Pterosaurs. "Care for some more fish," asked Lapinette, "it's all the way from Fregene." All they heard was crunching and slurping. The Wabbit mused to himself. "What on earth is this alarming thing we're supposed to hear." Wings fluttered round his ears. A pterosaur stopped eating for a second. "You can see it from here. Pollution." Lapinette blinked. "You don't have to tell us about pollution. We know that already." The third pterosaur - the one who seldom spoke - scrabbled on the brickwork. "We're from the past." Another pterosaur spoke. "And you've got good food here." Lapinette and the Wabbit nodded. "Stay as long as you like," said Lapinette, "but why is the water boiling?" The pterosaurs flapped their wings. "That's an intermittent effect - but it's going to get hotter. That's why we came." The multi-coloured pterosaur spoke. "It's getting cold where we are, but on the other hand we can see this time has its problems."  The Wabbit and Lapinette wondered how Turin might adapt to disgruntled Pterosaurs. "I could find you a suitable planet," speculated the Wabbit. Lapinette looked at him with a special look reserved for bad ideas. "Wabbit ..." The Wabbit was adamant. "It's only fifty light years from here. Bring all your pals ..."
[Picture of fish supper and fish dish at Pixabay]
at August 02, 2021