2. Wabsworth and the Ethics of Shocks 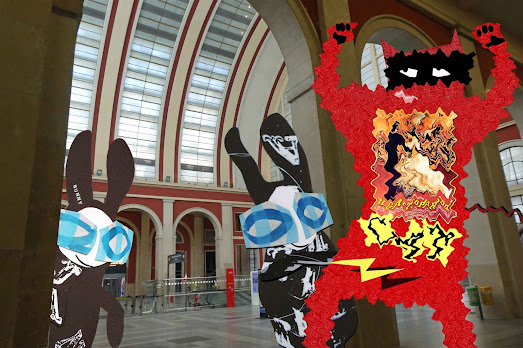 Wabsworth and the Wabbit caught up with Skratch at Porta Nuova Rail Station. With some stealth, Wabsworth crept up on Skratch, hailed him merrily and touched him. An electric shock coursed through Skratch's feline frame. The results were unexpected. Every bit of Skratch trembled and curled. He screeched loudly. "Yaaaaaaah!" The Wabbit was hiding behind a pillar and he was much amused. But when Skratch started to convulse and collapsed, he thought better of the joke. "Wabsworth are you certain about the voltage of that thing? Wabsworth looked back. "The man in the shop assured me it was safe for pranks." The Wabbit pondered as Skratch recovered. "What's the voltage and current?" Quick as a flash, Wabsworth replied, "About 9 volts and 10 milliamps." Skratch got back on his feet. "Wabsworth, did you connect that through your positronic circuitry?" Wabsworth's face fell. "I did." Skratch wasn't as angry as the Wabbit thought. "Well, they say that an electric shock once in a while is good for you. I could get to like it." Wabsworth leaned forward to give him another shock. "No!" yelled Skratch. He jumped back. "Like every fifty years," he hissed. The Wabbit was always alert to new weaponry. "Maybe we could adapt it for trapping our enemies." Skratch was appalled. "I don't think that's ethical." Wabsworth thought it was funny. "Ethics don't stop you playing with your enemies, letting them escape and trapping them again." "That's different," said Skratch, "it's ethical for cats." The Wabbit had an idea. "Let's ask Lapinette, she's well up on the ethics of enemies." They all agreed that was the best course of action. Carrying the joke electric shock machine, they set off in search of Lapinette.