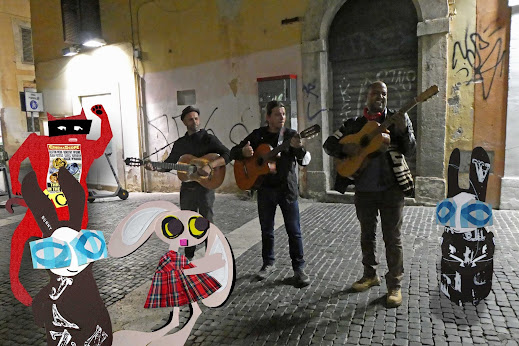 The Wabbit and Lapinette were heading for an Adventure Caffè when three buskers caught their attention. But more amazing still was the fact that Wabsworth the android appeared to be with them. He clapped his paws in tune to the Bossa Nova beat and swayed back and forth. Lapinette looked delighted and clapped her hands too. The Wabbit looked sceptical. "Don't worry," said the lead singer, "he's improving our takings." "By a third," nodded another. Skratch suddenly appeared to their rear, and he waved a paw in greeting as they all swayed. "But this doesn't get us anywhere in determining what kind of Adventure we had," moaned the Wabbit. No one seemed to care. Skratch ventured a comment. "It was another one of your eco-dramas," he meaowed. The Wabbit took a paw out of his pocket and started to clap like everyone else. "I'm pleased it can be pigeon-holed so easily," he said. Lapinette didn't stop swaying. "It was perhaps one of these vertical semiotics which polices the boundaries between humans and nature." Wabsworth started to sing. "Underground, overground, we can see, impossible places made for you and me." He twirled around and clapped again. "We'll get no sense out of him this evening," said the Wabbit. Skratch looked pleased as he shuffled a feline dance. "Viewers experience a corporeal identification with the monstrous creatures portrayed." Lapinette shivered with delight. "Melting of corporeal boundaries," she cried. "The Wabbit decided to join in and he swayed with the rest. "Did someone say embrace the animal other?" Lapinette laughed. "Prosecco for the band - and for us!"
[Thanks to:  Green Film Criticism and its Futures. Ivan Ivakhiv]
at August 09, 2021