4. Skratch and the Dodgy Remote Control 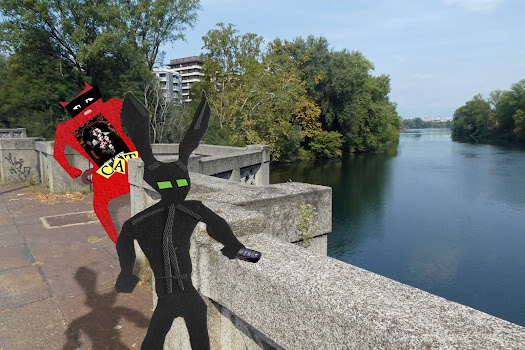 Skratch the Cat was out for a bit of a prowl, and he made his way along Corso Belgio to the Sassi Point. There he'd look for passing fish. To his surprise he noticed an Agent of Rabit on his own. They were always in pairs and never on their own, so he lurked on the bridge to see what transpired. Then he saw something on the parapet that looked like Wabsworth's electric shock machine. It was disguised as a car key remote control. You couldn't miss it. The Agent looked down. His paw reached out. Skratch considered courses of action. He could launch an all-out attack but that wasn't much fun. He could come up from the river like a sea monster and menace the Agent that way. He shook his head. He knew that Wabsworth never left anything anywhere - only by design. So he waited. The Agent poked the remote control. Nothing happened. He poked it again. Nothing. He lifted it. Not a great deal happened. He looked at it again, made a decision, and then tucked it away under his fur. Skratch knew it only operated when the button was pressed, so he decided to leave the whole matter in abeyance and report back. The Agent looked all round to see if anyone was watching. Skratch ducked out of sight behind the wall. Then the Agent started a tuneless whistle and walked back the way he came, "Nothing suspicious," he muttered, "nothing at all. I'll get back and we'll try it out. Maybe it will open an interesting car." Skratch watched him go. He looked as suspicious as someone who just bought a briefcase of forged banknotes. He tracked him until he came to a lair of some kind and made a careful note. Then Skratch bounded into the distance.