5. Lapinette and the Half-Decent Blast 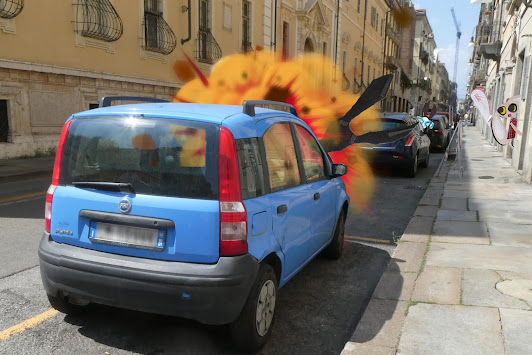 The Wabbit and Lapinette kept a lookout and not much time elapsed before the Agent came into sight. The radio would have crackled but the Wabbit muted all that. First, Wabsworth alerted them to the general target - and then a flustered call from Skratch told him the Agent had found the fake remote control. They watched the street. An Agent looked nonchalant with his device and he was waving it around. "I think this remote will open this particular one," he muttered. He looked from left to right and then he pointed it and pressed it. There was a faint buzzing, then a crackling. Then there was a sizzling. Suddenly the whole thing burst into flames. The Agent was enveloped in fire. "Eek, aaagh!! he shouted. Lapinette's wiring had done the trick. She smiled in triumph as she watched from a doorway. The team dragged the unwitting Agent from the flames and put him out by rolling him on the hot tarmac. "That'll teach you to take things that don't belong to you," said the Wabbit. He sounded like a bit a schoolmaster he used to know. The Agent had a bad case of singed fur but was otherwise unharmed. The car was a bit scorched and the Wabbit placed a note on the windscreen. "You'll take care of that, won't you Lapinette." Lapinette looked at the Agent and shook her head. "It's his fault," she said, "Fork up." The Agent put his paw in his fur and fished out some badly burned notes. The Wabbit grabbed them and tucked them behind the wipers. "Be on your way," he said to the Agent, "and don't smoke. It's bad for you!" The Agent staggered off down the road - but turned for a parting shot. "You haven't heard the end of this!" The Wabbit looked at Lapinette. Lapinette grinned. "I know that," she said. "My sewing bee will never let me forget it."