3. The Wabbit and Thorough Preparations 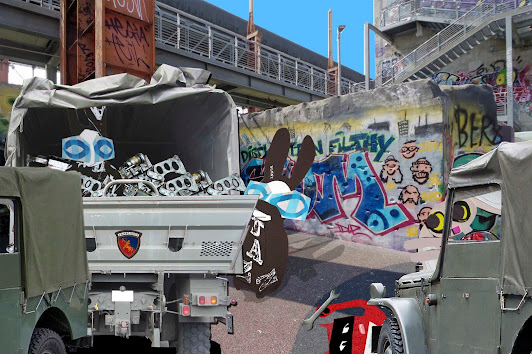 When the truck drew up in Pluto Park, there were already two jeeps in place. Skratch worked on one because he wasn't happy with its performance. Lapinette took charge immediately and eliminated his theory. "It's not death wobble, Skratch. Just a bad throttle body." Skratch was delighted because he could fix that in an instant. Wabsworth ensured the snazer guns were correctly aligned and functioning. The Wabbit fiddled with the lorry tail because he felt he was surplus to requirements. "Ouch," he said as he snagged his paw. "What are you doing, Wabbit?" said Lapinette. "Getting in touch with my practical side," said the Wabbit. Lapinette huffed and puffed. "Get in touch with my personal guard and tell them to be combat ready." "They're always ready for combat," shrugged the Wabbit. Skratch laughed and dropped his spanner on his face. "This is a serious mission, please take it seriously." Lapinette was livid. Wabsworth dropped a snazer on the Wabbit's foot. The Wabbit's smile didn't crack - although he wanted to yell out. Instead, he asked, "Seriously, what is this MacGuffin thing?" Lapinette watched Skratch and said nothing. "Let me guess. Is it a weapon of mass destruction?" said the Wabbit. "Yes," said Lapinette. "Oooh," said Wabsworth, "Explosive or infectious?" Lapinette drew a deep breath. "Both," she said. The Wabbit looked under the truck. "They've got to be somewhere!" Lapinette's sharp intake of breath alerted the Wabbit to the fact he'd made a bad joke in the wrong place. "This weapon turns things into zombies." The sound of jaws dropping could be heard a long way off. The Wabbit recovered first. "What do you call a row of zombies?" Lapinette was first to respond. "A deadline!" she groaned.
at July 02, 2021