2. The Wabbit and Lapinette Take 'em Out 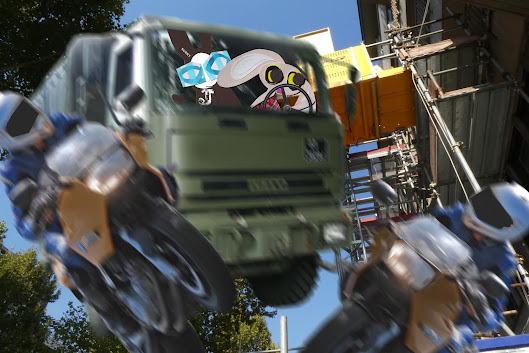 Lapinette drove fast and had no time for obstacles. But as she reached Via Cernaia she heard a clatter of motorcycles. She vaulted the statues. The truck soared high in the air. The Wabbit looked down at the vehicles. "Definitely hostile," he said and he gripped whatever there was to grip. The truck was airborne, but the bikes came from below, grazing her wheels. The riders sported black visors and they couldn't really see their faces. But their intent was clear. They meant harm. "I can hear a Rotax engine." The Wabbit knew his motorbikes but Lapinette wrinkled her nose. "I don't care what engines they have, they're dead ducks." She threw the truck to the left and then the right. The motorbikes span to the ground and no-one got back up. "We're meeting Skratch and the rest at Pluto Park," said Lapinette, "and I aim to be there on time." The Wabbit settled back in his seat as the truck crashed down on the road. "You should get new seats," he said and smiled. "These are new seats," answered Lapinette. "You could have fooled me," said the Wabbit. "They're racing seats from the Army and Navy Stores. Special offer," said Lapinette. The noise from the engine was deafening. "So what's the MacGuffin?" asked the Wabbit. Lapinette downshifted several gears then just as quickly upshifted. Street furniture flew. "It's super hush hush," said Lapinette. "Mmmm?" said the Wabbit. "A weapon so dangerous, it must not fall into the wrong paws," added Lapinette. "Where is this weapon?" asked the Wabbit. "In the wrong paws," said Lapinette. "Best get moving then," murmured the Wabbit. "Hooked up and ready to roll," yelled Lapinette. The truck swung into Corso Svizzera on two wheels. "Hang 'em out to dry," shouted the Wabbit.