1. The Wabbit and the Quiet Reverie 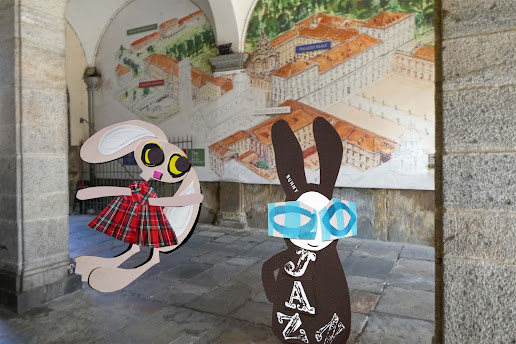 The Wabbit was hopping along, intent on his own thoughts. He'd just come from John the Baptist Cathedral where he'd enjoyed a crafty nap. He was still half napping when a familiar voice disturbed his reverie. "Hello Wabbit, you look half asleep." Lapinette rounded the corner. She was full of beans and just bouncing along. The Wabbit shook himself and pretended he was feeling normal. "Oh, hello Lapinette, I was just admiring the cloisters." Lapinette knew he was doing nothing of the kind. "You've seen them before, Wabbit." The Wabbit wished he hadn't had that nap. "Aren't the colours nice?" he said. "Very nice," sighed Lapinette. The Wabbit chortled. "I don't suppose you bring news of secret orders." The Wabbit always got like this between missions. He really wanted to be doing something although he knew he'd complain when he heard. "Yes," said Lapinette. "Oh no!" said the Wabbit. He paused. "Never a moment of peace," he added. He shook his head like a donkey. Lapinette pouted. "The Department says you have to tidy up your desk, it's a disgrace." The Wabbit laughed. "That can certainly wait. There's nothing in the way of monsters I suppose? Just paperwork?" Lapinette put her paws on her hips. "You haven't written the expected reports. You're five missions behind." "Plenty of time," said the Wabbit. He was beginning to wake up. Lapinette gave him a sideways glance. "I heard tell of some unexpected occurrences on the River Dora." "Nothing unusual in that," said the Wabbit. Lapinette looked at him out the corner of her eye. "Well, the water started to boil." The Wabbit looked sceptical. "Did anyone make tea?"