8. The Wabbit and the City of Zombies 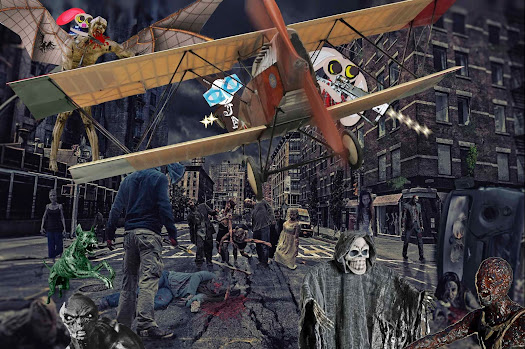 Lapinette and the Wabbit scurried to the airfield where they kept Susan and before long they flew over the stricken city. There were zombies everywhere. But Lapinette spotted their friendly ghosts - they were making short work of any zombies they could find. Lapinette loosed off a volley from her snazer gun. Zombies fell and were pounced upon by the three ghosts. A shout from the Wabbit alerted Lapinette to the giant winged zombie. "He must have followed us," yelled the Wabbit. From a nearby building, Tipsy descended, bearing her edged weapon. She slit the winged zombie's throat as if it was a slice of rump steak. Blood spurted and he slowly collapsed. The ghost dog fell on him with sharp teeth - and in two seconds he was so much dog food. Tipsy roamed the streets, followed by the ghost. Her knife flashed and the ghost followed her up. Susan's wing caught a zombie's head and soon it was rolling in the street like a soccer ball. Lapinette kicked it without compunction. "Goal," she cried. The zombies were thinning out and soon they were all gone. "Just one thing to do," said the Wabbit. The giant zombie was still at large and had trapped the rest of the team. "Let's go get him," said Lapinette. Susan wheeled round and darted across the city, leaving a trail of vapour. Tipsy and the ghosts followed her. "How shall I deal with the giant zombie?" asked Susan. "Fly round and round him until he's sick," said the Wabbit. "It'll be all over town!" said Lapinette. Then they laughed and laughed and laughed.