6. The Wabbit and the Ghost's Lair 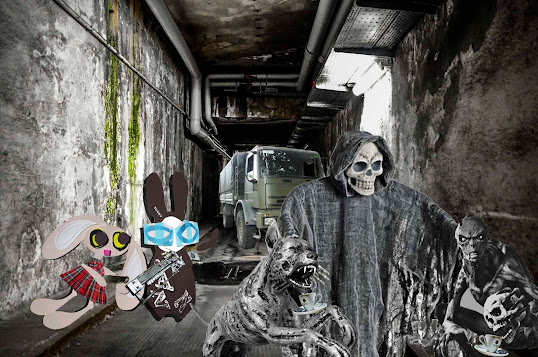 Lapinette and the Wabbit followed the ghost to his lair, which lay in a distant part of Torino, adjacent to the river. The ghost gave a single whistle. To Lapinette's astonishment and the Wabbit's horror another skeleton and a ghostly dog appeared. "These are my familiars," said the Ghost. He offered both of them espressos from under his cloak. "They will dispense with the zombies, if I give them enough coffee of course." The dog slavered and the skeleton chortled. "The Wabbit was sceptical. "Just these two?"  The ghost chortled too. "Just us three, Zombies are merely the undead. We are well and truly dead." "As doornails," said the skeleton. He gave a sinister laugh. The Wabbit looked at Lapinette. Lapinette looked back. "It's what we got," she shrugged. "We need a plan, said the Wabbit. "I'll round up the rest of the team. We move at my command." The ghost wrinkled his bony nose. "You'll bring plenty of coffee," he insisted. The Wabbit and Lapinette headed back to the truck. The ghost patted the ghostly dog's head. "Be patient my beauty, there's plenty of coffee on its way. The Wabbit got in the truck and Lapinette followed. "I'm uncertain of our allies," he said. Lapinette grimaced. "They say keep your friends close and your enemies closer." The Wabbit stamped on the throttle. "Within stabbing distance you mean?"  They turned and looked back, but the ghost and his pals had gone. "Where do we get the coffee?" asked the Wabbit. "I have a supplier," said Lapinette, "He grinds fine."