5. The Wabbit and the Espresso Ghost 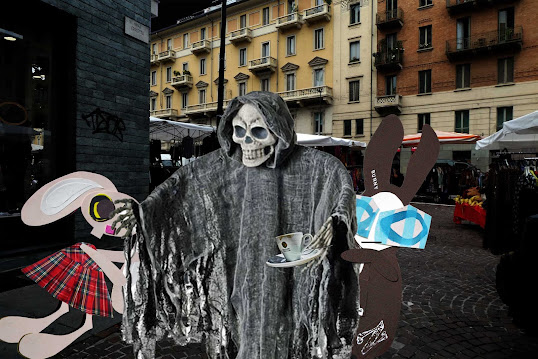 Tipsy and the rest of the crew scoured the city for more zombies but acting on an undercover report the Wabbit and Lapinette sped to Crocetta Market. It seemed cold. Even frosty. But what they saw weren't zombies. It was a bona fide ghost. This was a different kettle of fish and no mistake. The ghost walked up and down and bore a single espresso cup. "Fill my vessel," it moaned, "fill it now." The Wabbit decided that direct action was the only way to approach the matter. He prodded the ghost on its skeleton claw. "Perhaps we can be of assistance?" The ghost laid its other claw on Lapinette's head. Lapinette shuddered but didn't utter a sound. "The zombies have taken all the coffee," moaned the ghost. "All of it. All of it. Nothing left for a poor ghost like me." Lapinette signalled to the Wabbit. "This one's not with the others." The Wabbit nodded while steering the ghost along. "Let's get your coffee back," he whispered. The ghost whimpered. "I have no truck with the undead. I'll buy my coffee like anyone else." He produced a crumpled 2000 lire note. "That won't get you very far," said the Wabbit, "when did you die?" The ghost gave a terrible wail. "Some long time past." Lapinette had an idea. Ghosts had some native wit but zombies had none. "Maybe you could help us with our zombie problem." The skeleton became animated. "By scaring them?" He held his arms aloft and wiggled his fingers. "Boo!" he shouted "Boo boo boo!" His coffee cup went flying in the air and then he caught both cup and saucer with a single deft move. "That raised your spirits," said the Wabbit.