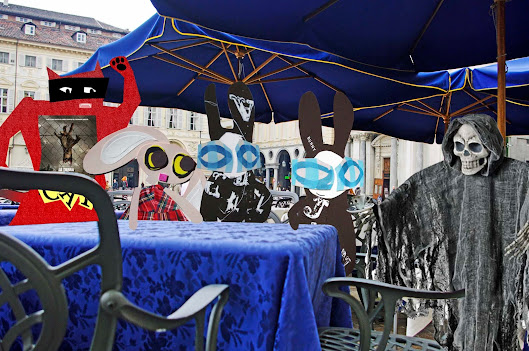 The ghost had appeared at the Adventure Caffè. There was nothing anyone could do to stop him. He still had a cup of espresso and was offering it around. "So this is your famous Adventure Caffè Commander Wabbit? Care for a coffee?" The Wabbit could see the coffee had congealed into a lump, and the cup and saucer was held together with glue. Skratch looked on in horror. The Wabbit grinned. "I suppose you'll let us have your ghostly analysis?" The ghost grinned. He found it hard not to. "I wouldn't dare presume." Skratch took the opportunity to have his say. "The main aim of the horror story is to produce spine curdling shock. Chill the blood too." Wabsworth snorted. "Surely that's not all." Skratch meaowed ferociously. "Our friend here," He gestured to the ghost, "can probably enlighten us as to the semiotics of the Zombie lineage." The ghost gnashed his considerable teeth. "We must in this case look to the semiosphere." Lapinette rapped on the table. "Cultural explosions I say! The zombie has historically proved more than capable of addressing contingent societal issues." Wabsworth was not to be outdone. "The zombie tale has an astonishing evolutionary speed." The ghost grimaced. "Not even ghosts can keep up. I'm afraid we're rather hidebound in our ways." The Wabbit flinched. "Would you say it pointed to our increasing feelings of lack of control in society?" Lapinette pouted. "Always changing and ever-threatening, we are endangered constantly." Now the Wabbit leaned across to the ghost. "Can you still scare up some drinks?" The ghost nodded and gently intoned in a wavering voice, "The Thirsting."

[The Wabbit team is indebted to the discursive paper by Ryan Lizzardi (2009), The Zombie Media Monster, Evolution as a Sign and Historical Allegory.]