3. The Wabbit, Lapinette & the Pterosaurs 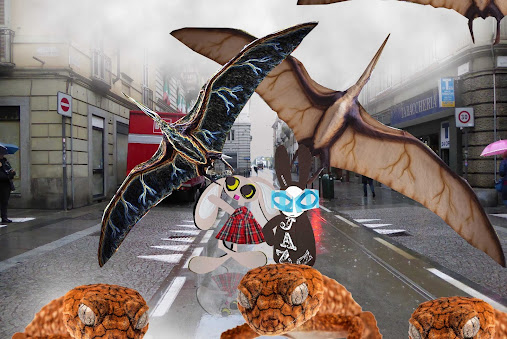 Lapinette and the Wabbit loped along Via Corte d'Appello in a hurry because it was raining and the Wabbit hated getting his fur wet. But it was more than raining. It was hot and steamy - almost tropical. Strange creatures walked along the street as if they belonged. The Wabbit stared at one of three enormous gekkos and tried to engage them in conversation. They weren't particularly communicative. They glowered at the Wabbit but that seemed normal because they glowered at each other too. A sudden arrival from above took Lapinette's attention. Three prehistoric birds swooped and hovered. The Wabbit looked up. "I don't like the look of these pterodactyls" he said. Lapinette tried to swipe one away, but it wouldn't desist. "Neither do I," she said, "but they're technically pterosaurs." They hovered lower and lower until both the Wabbit and Lapinette found themselves in the grip of strong talons. "They're not supposed to have these. It's only in films." Lapinette had taken an evening course in prehistoric times, but the pterosaurs didn't care. They gripped their victims and tried to lift them. "Get off!" shouted the Wabbit. The third one came down to help. "Come with us!" said the multi-coloured pterosaur. "We have something to show you," said the beige one. It grabbed the Wabbit's fur. The Wabbit yelled, "Hey leave the fur alone, it's not paid for." But his protestations fell on deaf ears. Both the Lapinette and the Wabbit were hoisted through the air and carried far across the city.  "I thought you didn't have talons," shouted the Wabbit. "Everyone's a pesky know-all," said a pterosaur.