7. The Wabbit and the Giant Zombies 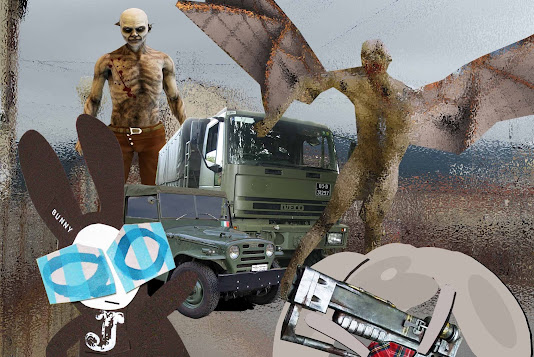 The plan had been this. The Wabbit and Lapinette were to draw the zombies out at the bridge. The rest of the team, together with the ghosts, were to cut them off at the Via Sacchi end. The ghosts were then to do their thing and the team would mop up and sanitise everything on behalf of the city. That wasn't to be. The Wabbit and Lapinette blocked the bridge with vehicles - and they thought it would be enough. But when the zombies turned up, they were huge. One was bigger than giants in fairy tales and the other was a winged creature from Revelations. Flesh dripped from their bones. The bridge turned a curious mottled shade a bit like the zombies. "Good grief," yelled the Wabbit, "They're monsters!" He grabbed Lapinette's paw and pulled her. She was all for facing them out. "You can't fight them!" shouted the Wabbit. Lapinette loosed off a few rounds of her snazer gun, but nothing happened. A few pieces of flesh flew into the air and just as soon reattached. They snarled ferociously and still they kept coming. "OK, I suppose so," she pouted reluctantly. She turned to run with the Wabbit. "What happened to the plan?" she asked as she ran. "All plans are off," shrieked the Wabbit. He looked behind him. The zombies seemed to have stopped to munch a few unfortunates who chose to cross the bridge that day. "Let's regroup," suggested the Wabbit. Lapinette turned back again as one of the zombies mouthed something. "It's talking to us," yelled the Wabbit. "I think it said it will mince us into pies," replied Lapinette. The Wabbit ran faster. "It's just not Christmas."

[Zombies by JuliusGronkievicz, Jule 55 at Pixabay]