9. Tipsy and the Last of the Zombies 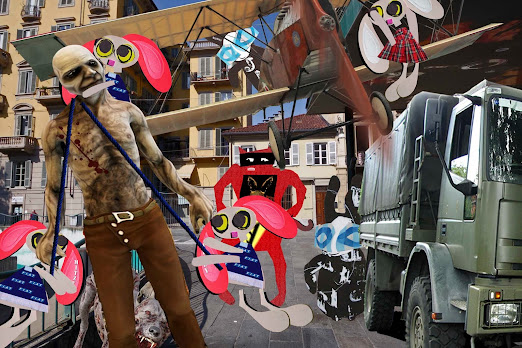 Susan flew over the last of the zombies. Everything seemed to be in paw. Lapinette's personal guard had the zombie tethered and Tipsy hung round his neck - although how she got there, no-one knew. "Can I keep him?" she yelled. The Wabbit drew the line. "Tipsy, you cannot keep a zombie." Tipsy yelled and whooped. "Why not?" The zombie raised his head. "You'll never take me alive!" Tipsy screamed with laughter and hugged his neck. The Wabbit shrugged and shook his head from side to side. Skratch looked up. "Wabbit, what happened to the flying zombie?" Lapinette shrugged this time. "Dead and gone." Skratch's eyes shot up. "Tipsy?" he asked. Lapinette nodded with a grim look. "She frightens me," meaowed Skratch. "She frightens all of us," said the Wabbit. Lapinette sighed. It was always best to humour Tipsy. "Tipsy, just don't let him out to roam the streets." The Wabbit pondered. "Didn't she keep one of the slithering worms?" Lapinette nodded again. The Wabbit shuddered at the thought. But Lapinette was keeping count. "She also kept that Tiger that came at Christmas." The Wabbit grimaced. "His name was Baekho. How on earth does she feed them all?" "I Don't ask," said Lapinette. Wabsworth seemed to have inside knowledge. "She feeds them prisoners." Lapinette's fur stood on end. "Just joking!" said Wabsworth. He shook with mirth. The zombie gave a yell. "I like brains!" The Wabbit gave a brief laugh. "Most people are safe then."