2. The Wabbit and the Three Hot Frogs 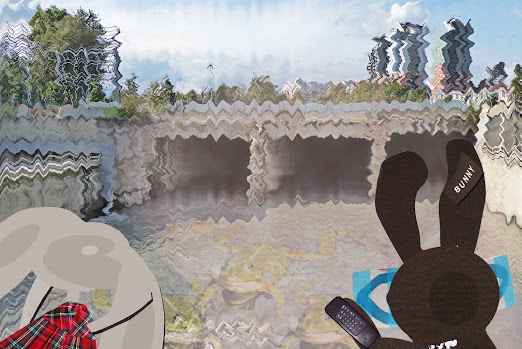 Lapinette took the Wabbit to the Dora where the boiling had occurred. It wasn't too far and the Wabbit was happy to amble. He could see it from a distance because a heat haze distorted everything. The water looked very hot at a particular spot and the Wabbit gazed at it for some time. He could make out some activity. He focussed his special glasses - and what he saw made him chuckle. There were three rather large frogs in the water. He pointed them out to Lapinette and now she could also see them. They croaked and croaked in greeting. The Wabbit had a universal translator although it usually too a good hard knock to get it going. "Hello frogs," he said, "I haven't seen you here before." The frog at the front took the initiative. "We came here for the heat." The second frog was more forthcoming. "Were on our holidays." Lapinette spoke in a voice she felt was reassuring. "You're not responsible for the water boiling?" The frogs did a little dance by linking their fingers and going round and round. "Good gracious no. Nothing to do with us." The Wabbit felt he was getting nowhere. "Who put you onto it?" The frogs continued to dance. "The frog tourist board said there was a lovely river," said one frog. "With hot currents," added another. "We set out immediately," said the third frog. The Wabbit thought he was getting closer to a solution - at least he could solve the frog problem. "Where from exactly?" he chirped. "Mexico," said a frog. The Wabbit thought about it. "Did you come through a cenote?" Lapinette chipped in. "It's not possible. Cenotes aren't so big." But a frog nodded gravely. "That's what you think."

[Frog by Alexis at Pixabay]