2. The Wabbit and the Fur from the Past 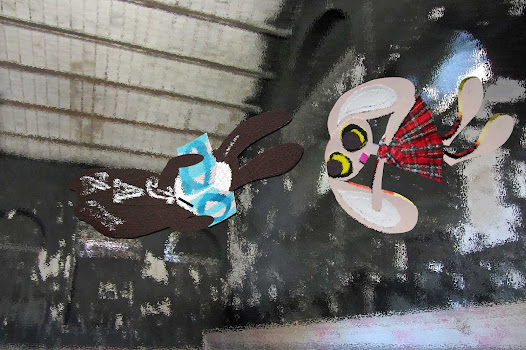 Now the Wabbit was spinning. The crime museum had gone. He recognised the new place as the old slaughterhouse in Testaccio. He was dropping steadily to the floor. He looked up at the rafters and across at the walls. They rippled like a black ocean. It was then he saw Lovely Lapinette. She was calling to him. "Wabbit, Wabbit you're dreaming." The Wabbit knew he was dreaming. He just couldn't do anything about it. She was shouting again. It was more of a yell. "You're dreaming of old adventure locations, Wabbit." His mouth moved in response, but no sound came out. He stopped a metre from the floor. He wiggled his paw to see if it would move. It did. Lapinette drifted close by. "This is where we met the Slifts. It's a dream and it's all in your head." The Wabbit hit the floor with a thump and so did Lapinette. "Fake Fur Futures?" His voice was slurred. "Yes," said Lapinette. "Are you dreaming too?" asked the Wabbit." It was mangled and sounded like sheeming choo. "Yes," giggled Lapinette. The Wabbit slowly sat up and shook himself. "I'm not dreaming anymore." Lapinette laughed a silky laugh. "Yes, you are." The Wabbit put a paw on the wall. It went straight through. Lapinette dug him in the ribs. "What do you want to do in your dream?" The Wabbit thought for a while. "I'd like to wake up?" Again, he heard Lapinette's silky laugh. "That's no fun," she whispered, "Live a little. How would you change the past?" The Wabbit tried to recall the events. "Oh, I remember. It was like the Wild West." "Well, air yer lungs," suggested Lapinette. The Wabbit thought about it, smiled and then effected a cowboy drawl. "I'm looking for the man who shot my paw."
at June 12, 2021