4. The Wabbit and the Gnamskull's Pizza 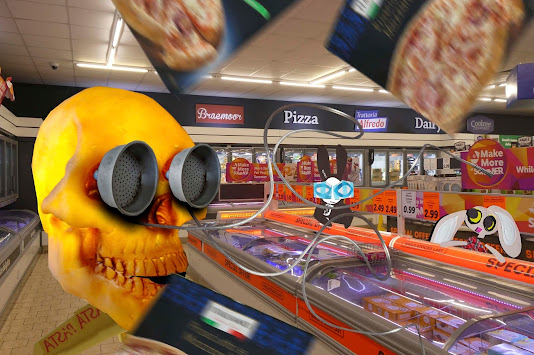 Lapinette moved the Wabbit's dream along. With a wave of her paws, they were in a supermarket in Ireland. "What on earth?" began the Wabbit. Lapinette silenced him with a paw to her lips. They waited until they heard a commotion. It was a monster the Wabbit hadn't seen for number of years and it was at a freezer compartment, tearing at pizzas. "A gnamskull," breathed the Wabbit. "A gnamskull and it's hungry for pizza." The gnamskull's teeth tore at the cardboard but it was tough work. He tried several until he found the one he wanted. Then he set about it with vigour. The Wabbit could only watch. Then his eyes flickered across to Lapinette's. "That's my favourite shop-bought pizza," he whispered. Lapinette gazed back. "You can talk as loudly as you like Wabbit, I don't think it can hear you." The Wabbit shouted. Nothing happened. "It's your dream," said Lapinette, "it must mean something to you." The Wabbit strode over to the creature and tried to take the pizza away. The gnamskull gripped it vicelike in its teeth. There was no way the Wabbit could get it. "Give me back my pizza," shouted the Wabbit. The Gnamskull shot behind a counter with the pizza. The cardboard had gone and he was eating the frozen contents. "Are you some kind of weirdough?" shouted the Wabbit. Lapinette shrugged. "The dream belongs to you. What happens next? "The Wabbit launched at the Gnamskull. "You're a real pizza work!" he shouted. The gnamskull dived under the counter and squealed. The Wabbit gave up. "Now look here, gnamskull," he said. "My pizza jokes can't be topped."