7. Skratch and the Stick of Dynamite 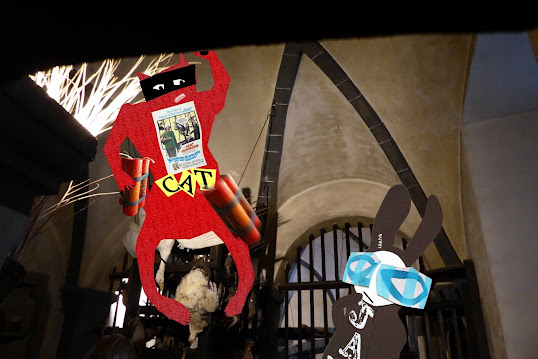 The Wabbit was passing through the kitchens of the medieval castle and looking at the food in preparation. He wasn't quite happy with the cook's choice and his nose wrinkled. But suddenly he spotted Skratch, hanging from the roof. "Hello Wabbit," cried Skratch. He seemed pleased with himself, but the Wabbit was puzzled when he saw the dynamite. "What are you up to?" he asked. Skratch swung down. "I just disarmed a couple of thugs outside the castle," he meaowed. The Wabbit looked none too pleased. "What did you do with them?" he asked. Skratch snickered, "I ate them." The Wabbit jumped in the air. "Whaaat?" Skratch laughed. "Just joking Wabbit. They're all locked up in the cells." The Wabbit hopped up and down. "We were hoping to act as decoys and find out who they were working with." Skratch didn't see any problem. "Well, we're no worse off, I can let them escape." They could have killed you Skratch," yelled the Wabbit. "Who me?" said Skratch. "I'm a cat. I have nine lives." The Wabbit put his paws on his hips, a little like Lapinette. "How many have you used?" Skratch counted, but when he came to eleven, he gave up. "I see what you mean," he purred, "Anyway, these two rabbits are completely hopeless." "They got us with stun grenades," said the Wabbit. "Never mind," said Skratch, "This dynamite is perfectly safe." He threw the dynamite at the Wabbit. The Wabbit dived out the way as it hit a metal grill and exploded. Pots and pans and crockery clattered to the ground. The Wabbit picked himself out of the debris. "What am I going to tell the cook?"
at June 04, 2021