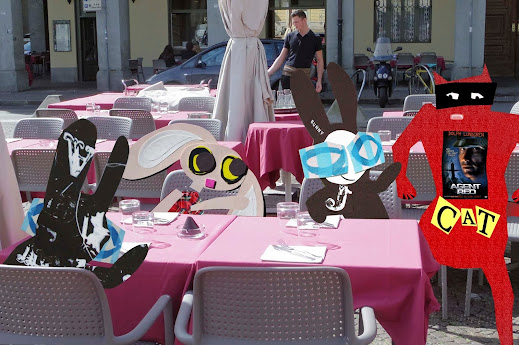 It was a jovial gathering at the Adventure Caffè. Skratch as usual was late - but he arrived in good form. The Wabbit welcomed him with unusual vigour. "Here's my good friend, Skratch the Cat!" Then he added, "It was Skratch who saved the day." Skratch raised an eyebrow. "I thought I'd messed everything up." Lapinette was cool as a carrot. "Not one of us ever messes up." Wabsworth chimed in. "Not much anyway!" The Wabbit grasped Skratch's paw. "Tell us oh great critic. What was that for a sort of Adventure?" Skratch leaned back. "I'll tell you now. That was a novel and exciting story featuring great danger." The Wabbit interrupted. "Which the main protagonist overcame with good humour!" Skratch meoawed. "But there was a main signifying feature used to comic effect. That was ... the dynamite!" Wabsworth tapped on the table. "It definitely avoids the wider extra-diegetic implications of conspiracy films that we know and love." Through comedy," added Lapinette. Skratch nodded. "The dynamite would not explode - except in particular circumstances. So, the comedic effect was placed in the final frame and suggested exactly such a circumstance." Lapinette laughed. "Explosive! I'm glad I wasn't in that frame." They all giggled. Skratch continued. "The Agents were emotionally unstable and so was the explosive." The Wabbit smiled. "So maybe we could scare up a drink?" Lapinette laughed. "Maybe we're just not scary enough?" Wabsworth was tickled by this and thought of a joke. "Lapinette," he said, "You're dynamite!"