6. Skratch and the Flying Leap 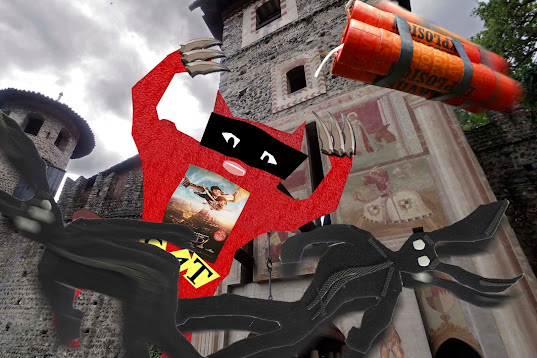 As a kinetic projectile, the decisive factors were speed, object size and drag. For Skratch that was automatic. He propelled himself forward with a thrust of his rear legs. His huge claws raked from right to left. The two Agents didn't stand much chance. Caught by the claws they were thrown to the side and landed in a tumbled heap. Dynamite flew high in the air. Skratch flipped and summersaulted. With a single lunge he caught the dynamite, tucked it into his fur and landed feet down on the Agents chests. "Up to no good?" he shouted. "I've caught you in the act." The Agents were dazed and could hardly answer. Skratch knelt beside one of them. "Talk," he said, "talk fast." The first Agent thought quickly. "We're tourists," he gasped. "We're having a picnic," said the other. "Fimble fambling fools!" yelled Skratch. He picked them both up by the scruff of their scrawny necks. "Lucky it's not your ears!" He started to drag them into the castle and headed for the cells, meaowing and hissing alternately as he sped along. "I have a lovely spot set aside for fools like you." It was a dank day and the dim prison cells failed to lighten it. A single light illuminated the bars. They sat in a corner under the light bulb looking miserable. Skratch plucked the dynamite from his fur and juggled with it for while. "Strange tourists, you. I suppose you were going to brew up." They nodded vigorously. Skratch slammed the prison doors with a clang, and paused to read them their rights. "Anything you say will not be taken seriously. You're entitled to a lawyer but we haven't got one. Understood?" They nodded their heads. Skratch left to find the Wabbit but he was laughing. "A right pair of Herberts."
at June 02, 2021