The Wabbit at his Adventure Caffè. 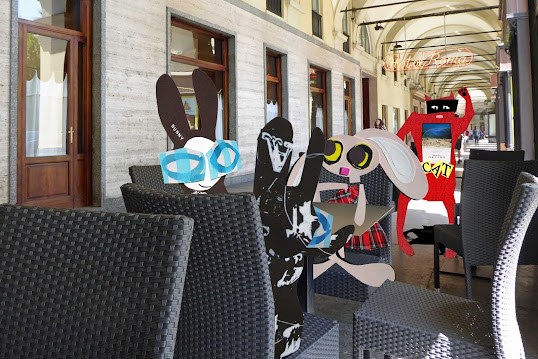 The team met at a Caffè they knew and loved. Skratch arrived late, as was his way. Wabsworth peered round Lapinette to watch his approach. He was in good humour and raised his paw in greeting. "Hello everyone! What a splendid adventure!" Skratch liked to have first go at explanation and he was determined. "Let me give you my learned analysis." He shielded his eyes from the sun and sat down on the only seat available. He pulled it forward. "That sun is fierce," he said. The Wabbit was pleased to see him. "Tell us oh learned one, what was that for a sort of Adventure?" Skratch's meaow reverberated down the porticos. "It was a conventional device for a series," he said. "But I must mention Heidegger."  Lapinette gave a slight giggle. "Must you?" Wabsworth was interested however, and he leaned back. "Being and Time," he murmured. Wabsworth had recently undertaken a study of world philosophy in alphabetic order, and he'd lingered on "H". The Wabbit merely laughed. "I suppose you're going to give us all that guff about people seeking repetition because it makes them comfortable." Skratch pretended to be horrified. "I am not a dispenser of old guff," he meaowed. "Repetition takes the past and gives it meaning and sense. It may therefore be understood." He nodded gravely as if agreeing with himself.  Lapinette wasn't to be outdone. "Seidel thought of this as a redredging that reclaims the past." Skratch was super pleased. "You're a marvel, Lapinette." The Wabbit grinned. "It would be marvellous if Lapinette could attract the attention of the waiter! She's awfully good at that."
at June 25, 2021