5. The Wabbit and a Dream of Rail Lines 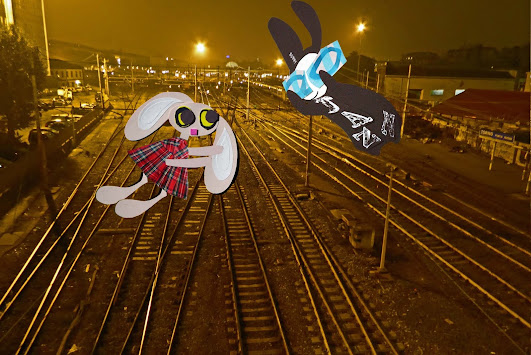 The supermarket had gone and the Wabbit was dropping once more. There was a smile on his face because it was so peaceful. He could make out the railway station and the lines below, but he could hear no trains. Still, his nose picked up a static smell from the electric pylons. It seemed comforting. He continued to drop until he passed the cables. Lapinette was shouting. "Wabbit, this is the end of your dream." The Wabbit grinned to himself. "Is it over? So soon?" Lapinette yelled this time. "Wabbit wake up." The Wabbit didn't want to. Why?" he mumbled, "it's so comfortable." Lapinette floated closer. He could feel her paws touch his. "All good dreams must come to an end," she said. The Wabbit was aware of sounds from the nearby shunting yard and he could hear cars pass over the big bridge. There was the whoosh of a tram. He shook his head. "I like the railway and all that goes with it," he said. Lapinette was insistent. "You have to come back to us Wabbit. You have work to do." The Wabbit revolved through 360 degrees but seemed reluctant to waken. Lapinette spoke again. "You can visit the railway any time you like." The Wabbit smiled. "I can, can't I?" With a sudden shudder he shook himself awake. He was still floating above the railway but plummeting fast. The lines loomed. He tried to click his fingers. The scene faded and he was back in his bedroom. "Phew," he said, "these lines must represent the paths and choices I have in life." He was still slurred. Lapinette prodded him fully awake. "You have an unconscious desire to marry a train." The Wabbit laughed and thought about it. "You Freud, me Jane?" he giggled.
at June 21, 2021