1. The Wabbit and the Secret Mission 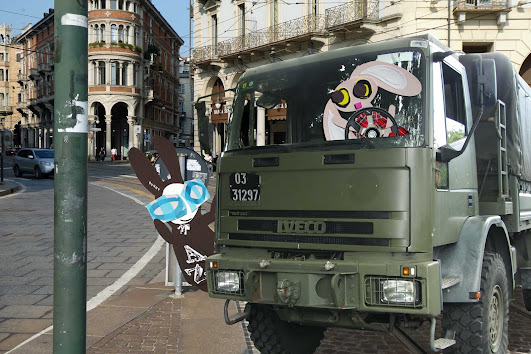 The Wabbit was hopping along Via Pietro Micca when he saw Lapinette coming towards him in a truck. He stepped sideways but to no avail. She stopped a centimetre from his feet, then signalled for him to get on board. He swung himself up with a friendly wave. "What gives, Lapinette?" The Wabbit liked to use hippie vocabulary once in a while. "Wabbit, we have a mission." Lapinette sounded urgent. The Wabbit was surprised. There was nothing on the horizon, or so it seemed. He paused by the window. "What kind of a mission?" Lapinette chortled and floored the throttle. The truck screeched as it took off at speed. "A secret one of course." The Wabbit jumped into a seat and hauled the door shut. He hadn't supposed it would be any other kind. "We'll need all our vehicles," she said. She pushed the truck up the gears and careered off into Via Antonio Bertola. The Wabbit sat back and smiled. "Is it urgent?" Lapinette rounded a corner on two wheels. "Everything is urgent for the Department." The Wabbit nodded his head and wound the window up against invading dust from nearby tram works. "Agents of Rabit?" asked the Wabbit. "Don't know," said Lapinette. "Euls, Skuttles, Gnamskulls?" suggested the Wabbit. "No idea," yelled Lapinette. She crashed down three gears without regard for synchromesh. The Wabbit glanced in the back of the truck. It was crammed with weapons. "Expecting trouble." It wasn't a question. "Triple trouble," replied Lapinette. "Trouble is my trade," said the Wabbit, "How else would I make any money?" He leaned forward, opened a hidden compartment under the dash and grinned. "My emergency C4 is still here." Lapinette replied through gritted teeth. "Business will boom!"
at June 28, 2021