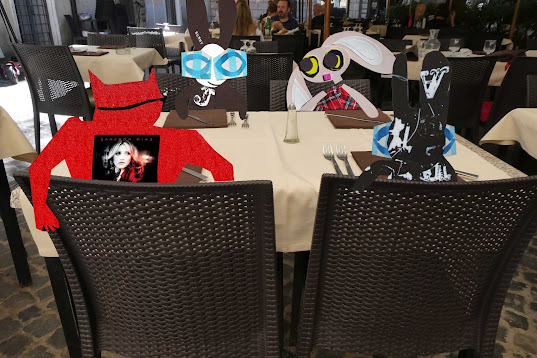 The gang all met up at Luigi's famous restaurant to discuss what kind of adventure they just had. Skratch was early for once and he led the discussion. "I must say that was an excellent example of a mystery." Wabsworth appeared puzzled. "What, no semiotics, Monsieur Skratch?" Skratch meaowed, "I was getting to that. It was realism, perception and truth." Lapinette stifled a grin. "What, all three at the one time?" Skratch paused. "The box is a robust sign, and its real purpose is to open the gates of the unconscious." The Wabbit was desperate to get started. "Thus entering the realms of obscurity, meaningless and chaos?" Lapinette waved her arms. "Only partially, because it was a battle between good and evil." Wabsworth chimed in. "Yes, we wouldn't want psychology to destroy the mystery of magic." Lapinette tut tutted, shook her head and continued. "Yet, the story was deeply symbolic. I couldn't help thinking of Pandora's Box. When you opened the box, all evil flew out - but there was hope left inside." "I shouldn't have thrown it away then!" said the Wabbit. Lapinette sighed. "I think the box will get on just fine on its own. Zeus will look after it. There's no way to escape the will of Zeus." Skratch was very happy with this. "That box represents your unconscious, Wabbit." Wabsworth wanted the last word. "And no matter how complex the box's decorations, it's symbolic worth lies in what it contains. To open it - is to take a risk." The Wabbit thought for a minute. "Any risk of a drink round here?"