7. The Wabbit and the Extra Vehicle 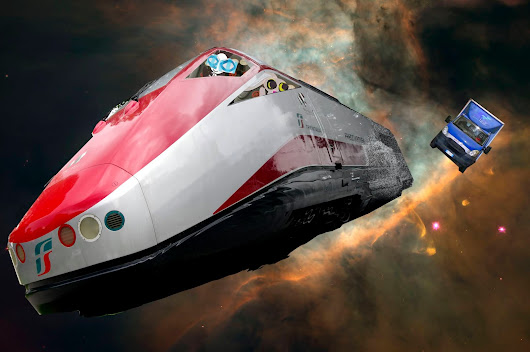 Thinking better of buying the van, the Wabbit and Lapinette made their way back to join Quantum the Time Travelling Train. But the van followed them. Through the auction room and up the rickety-rackety stairs, it followed relentlessly. The Spieler stood in their way but the van just ran him over. They could hear the crunching of his bones. The Wabbit shrugged and ran on. Finally they arrived at the space tether and Quantum guided them in. Then they looked back. The truck had followed out into space. The Wabbit offered up his paws. "I put the money back, I swear I didn't buy him." Lapinette continued to insist it was his fault, but there was nothing the Wabbit or anyone could do. He couldn't hear its engine but he spotted exhaust fumes. "We'll have that Greta Thunberg on our backs for this." Lapinette said something that the Wabbit couldn't quite hear, but he knew it was very rude indeed. The Wabbit yelled to Quantum and crashed into lattice drive. There was an explosion and they left at speed. But the truck was still there. Quantum spoke to the Wabbit over the intercom. "I'm getting a communication from the blessed truck you brought with you." He sighed deeply and asked what it was. "He wants to know how he gets into second gear," said Quantum. The Wabbit gritted all of his 28 teeth. "Tell him to select reverse and go home." There was a pause. "He says it's broken." The Wabbit let fly with several expletives and ended with: "We don't have parking space." They heard a babble of signals, then Quantum spoke. "He says we're in space now and there's plenty of space."
at February 17, 2021