1. The Wabbit and the Unobtainable Item. 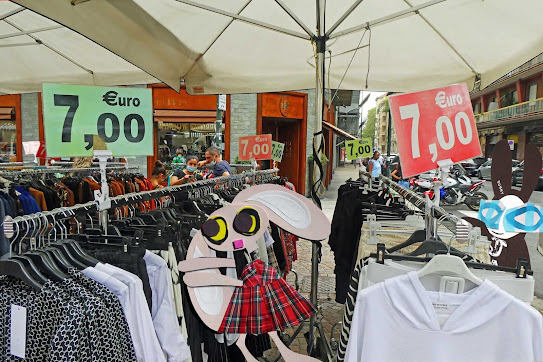 The Wabbit caught up with Lapinette at the Crocetta Market where she was totally absorbed in shopping. "Don't like that one," she muttered, "Oh, but that one's nice." The Wabbit paused for a while and listened, smiling to himself. Lapinette could spend all morning at Crocetta Market. Sometimes she bought a mass of things and sometimes nothing at all. The Wabbit was totally different and there wasn't much there for the likes of the Wabbit. No unobtainable jazz albums, no small tools that he could keep in his fur. Just ladies clothes. The Wabbit crept behind a nearby stand and watched her. He decided to play a joke. Dropping his voice to an audible whisper he hissed, "I am the Ghost of Crocetta Market and I command you to buy the largest hat you see." Lapinette didn't turn a hair. "I can see you Wabbit, you're reflected in a mirror." The Wabbit effected disappointment. "Found anything nice?" he said. "I found Bix Beiderbecke's debut album, playing with the Wolverines," said Lapinette. "That's impossible!" replied the Wabbit. Lapinette laughed a quiet laugh. The Wabbit half turned as if to go and find it - but turned back. "You're joking me," he said. "I am!" smiled Lapinette. The Wabbit watched her as she continued shopping. "I feel a new adventure coming on," he said. "That's nice," said Lapinette. She continued shopping. "Monsters galore!" continued the Wabbit. "There's a nice jacket here with monsters on the front," murmured Lapinette. The Wabbit pretended excitement. "It's a start."

[When Bix Beiderbecke played with the Wolverines, a 78rpm record had an insufficient 3 minute play time]