2. The Wabbit and the Design Invasion 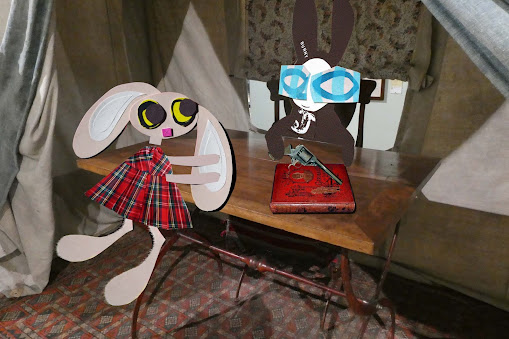 The Wabbit searched for his old desk in vain. But it had been replaced. Everything was furnished in a retro style from the time of the Risorgimento. All his disparate bundles of papers had gone. Old invoices waiting for payment had disappeared. In their place, an old revolver and a book about the life and times of Garibaldi lay on a clean desk. The Wabbit sat down and gazed in amazement. He looked at Lapinette. "What the Binky is going on?" Lapinette grinned. "The Department brought interior designers in. Everyone needs a clean start. That's what they said." The Wabbit lifted the revolver and sniffed it. "This is ancient," he said. Lapinette sprang in the air then pirouetted around. "You're not supposed to use it, Wabbit. It's supposed to give you ideas." The Wabbit flourished the gun and thought merciless thoughts about interior designers. "It's given me ideas all right." He put the gun down and leafed through the book. "Inspirational," he grinned, "I could always hit somebody with it." Lapinette continued to dance around. "I think it's a great idea." The Wabbit toyed with the pistol and spoke with great enthusiasm. "First we'll get Garibaldi out of prison." Lapinette laughed. "He was released in 1831."  The Wabbit laughed too. "Better late than never." Lapinette was still for just an instant. She placed her paws on her hips. "Now pay attention, Wabbit. This is supposed to give you ideas for combating the wicked Agents of Rabit." The Wabbit stood up waving the old revolver. "Send out the 400 rabbits. Arrest the usual suspects!" Lapinette sighed. "Will you be serious for just a minute?" The Wabbit frowned. "I was being serious."
at February 24, 2021