6. The Wabbit and the Shabby Market 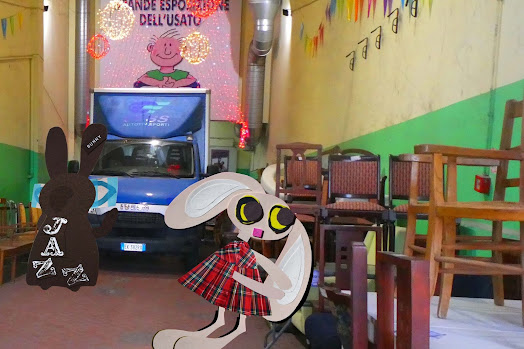 The scene gave way to a very shabby market indeed. Lapinette paused to scrabble but the Wabbit strode forward with purposeful expression. "Serviceable van here," he said, "it's small but properly marked." Lapinette looked round. "It's probably for moving things around, Wabbit." The Wabbit was skeptical. "On an asteroid?" The Wabbit looked around the rest of the market. "A load of old tat," he said. Lapinette laughed. "I thought you liked that." The Wabbit shook his head. "To a limit," He wasn't so happy, but he searched and searched anyway, coming up with next to nothing. "Seems to still be Christmas here," he said. "They might have wanted to liven it up," replied Lapinette. "It needs it," scoffed the Wabbit. He looked at the van again. "How much do you think they want for it?" Lapinette was looking at an old chair. "About a fiver," she said. The Wabbit nodded. He took five QUID out of his fur and laid it on a nearby shelf. Then he jumped inside the van. "The keys are still in it." He started the van and everything shook. Lapinette waved the fumes aside. "You can't take the van," she said. "Why not?" said the Wabbit. He put his foot on the throttle and it started to move. "I forbid you to take the van," said Lapinette. The Wabbit gave up and jumped out. But the van didn't stop. It rolled past Lapinette and out of the doors, into space. "I told you," said Lapinette. The Wabbit watched it go. "It's going about its appointed rounds," he observed, "Maybe it's 2020 GT." "QG," said Lapinette.

[ "A car-size asteroid flew within 1,830 miles of Earth over the weekend, the closest pass ever. We didn't see it coming."]