1. The Wabbit and a Difficult Admittance 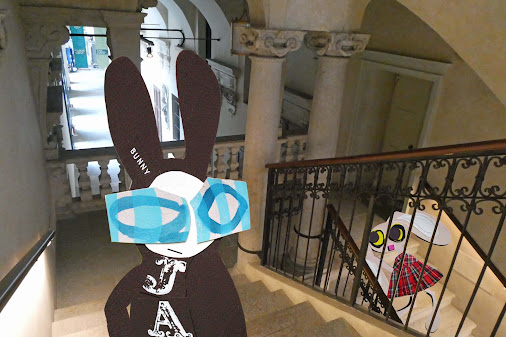 The Wabbit stomped up the stairs of the Department of Wabbit Affairs. He was in a bad mood for several reasons. He'd been called in for new orders just when he was taking a well-earned break. But when he'd turned up, he found that new security protocols had been put in place. The doorman had asked him for his pass. The Wabbit never carried it. He'd known the doorman for more than ten years and pointed this out to the doorman. But the doorman insisted it was more than his job was worth to let him in. The Wabbit had to return to the house and go through drawer after drawer. Finally he'd found it but the doorman pointed out that it was out of date. In order to get it re-validated he had to enter the building but the doorman continued to refuse him admittance. Finally, he'd bribed the doorman to look the other way. This cost him a dinner for two at Piano 35, the slickest restaurant in town. So he growled on his way and made a detour to the credentials department, where a very large rabbit put him through an interrogation the like of which he'd never endured. "This better be an exciting mission," he said to himself. He thrust his new pass deep into his fur and scowled. "The Ministry for Revenge will hear of this." His blood boiled. But then he heard the voice of Lovely Lapinette calling after him. He looked back as she shouted, "I've got your new pass, it came in the post." The Wabbit now had two new passes, but said nothing. He slid the duplicate further into his fur and smiled. "Thank you so much, Lapinette." Lapinette looked at him. "How did you get in?" "Charm," said the Wabbit.
at February 22, 2021