2. The Wabbit and the Object in Space 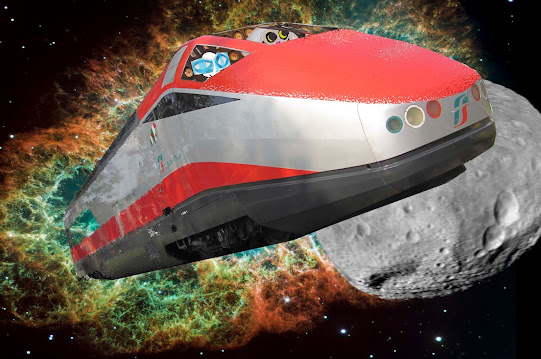 The Wabbit persuaded Lapinette he knew of a much better market but it was a bit of a hike. Soon they sat aboard Quantum the Time Travelling Train with the Wabbit in charge. Kepler 186-f was an M Class planet and was only around 500 light years away. The Wabbit had heard it boasted some of the best markets in the Milky Way - but how much of that was tittle tattle he had little idea. The Wabbit tried to set coordinates but Quantum was ahead of him. With a blast of hot gases, he was off. It was all for show, because Quantum emitted little in the way of gases. With hardly any motion at all, Quantum engaged lattice drive. The Wabbit leaned back in his seat as they flashed through space. "Just a little jaunt," said the Wabbit. Lapinette was amused. "A spin?" she asked, "I hope you packed a picnic basket." The Wabbit tapped a hamper beside him. "Just in case we get hungry," he said. The speaker system crackled. "Better prepare for evasive action Commander," said Quantum, "we have a rogue asteroid in our path." The Wabbit was confused but Quantum anticipated his confusion. "It's also travelling at lattice speed, Commander." It was highly unusual. Quantum said as much as he sidestepped the asteroid and booted his engines to maximum. Soon the asteroid disappeared, but just as quickly reappeared on the starboard side. "I can't shake him," said Quantum. "Is there any immediate danger?" asked Lapinette. "No," responded Quantum in an annoyed voice. "Just leave him then," said Lapinette. Quantum chuckled. "I believe we have no crater enemy."