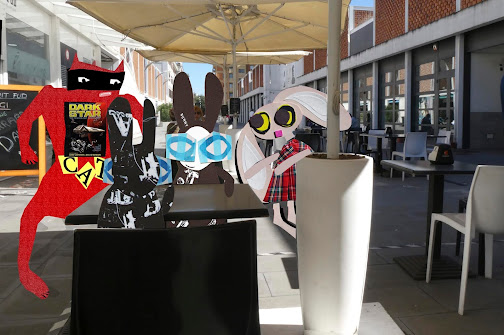 Skratch the Cat was late as usual but not by much. Lapinette was late too. The Wabbit and Wabsworth were engrossed in conversation and were merrily rapping paws on the table. "Hello Skratch," said Lapinette, "We're just in time to tell everyone what an exciting adventure the Wabbit and I just had." Wabsworth was already in full flow. "I've been hearing all about it." Skratch leaned over the table. "I thought it disappeared, like all sci-fi, into the accretion of postmodern theoretical debris." The Wabbit laughed. "I don't know how you can justify that one, Skratch." I can't," meaowed Skratch, "but I rather like saying it." Wabsworth coughed. "Let's lay bare the cultural instrumentalities at work." Lapinette groaned. "But that fails to adequately deal with generic issues." The Wabbit wanted to have his say. "The best we could do was to introduce a rogue truck as the monster. This struck at the heart of generic convention." Lapinette wasn't impressed. "Where does that stand in the paradoxical circle of cause and effect?" Skratch was amused. "Where is the truck anyway?" "Round in the corner in the underground car park," said Lapinette. "That's a postmodern aesthetic dilemma in itself," replied the Wabbit, "It calls into question the existing patterns of consumption and usage." Lapinette allowed a small guffaw. "That's what the truck said anyway." Skratch was getting thirsty. "What about or own patterns of usage and consumption?" The Wabbit raised himself up and shouted to the bar. "Four proseccos please!" "And a packet of peanuts!" added Lapinette.