3. The Wabbit and the Rattle of Gunfire. 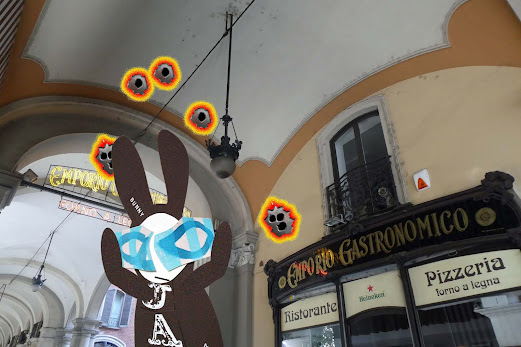 The Wabbit tried to forget about his new office and sauntered down the porticos thinking of other things.  He looked at a nearby eating establishment and wrinkled his nose. If it described itself as a restaurant it had no business selling pizzas. That was his view and he was going to stick to it.  He was so busy thinking that he didn't take any notice of the first crack. He thought it was a car backfiring. When the second came he also paid scant attention. Then when it became a rattle accompanied by flying plaster he ducked down and took evasive action. Down on the ground, he tried to see where it came from. There was another crackle. It looked like it came from the other side of the street. A barrel poked out from a window and occassionally issued flame. The Wabbit bolted for the other side but the bullets followed him. They were a very heavy guage and smacked into buses, trams and cars. Traffic came to a standstill. The Wabbit rolled under a bus shelter. He was on the same side of the road as the weapon now, and he'd narrowed the angle. It gave him time to think. Who could this interloper be? Maybe there was more than one. He saw two figures dart out from a building carrying a massive weapon. But the weapon was old. Very old. And so were the figures. "Why me?" thought the Wabbit, "why does it always fall to me to deal with bizarre actions?" The Wabbit got to his feet and dusted himself down. Bits of plaster flicked everywhere. He watched the two figures disappear into the metro. "Going to catch a train are you?" mused the Wabbit. He flicked a last piece of plaster from his fur. "I'll catch up with you! And you're getting the dry cleaning bills."